When we think of the Chrysler Cordoba, we think of the bloated, Corinthian Leather-equipped Malaisewagon pitched by Ricardo Montalban during the middle 1970s. That car lived on the Chrysler B platform, making it first cousin to the Duke Boys’ 1969 Charger plus countless police vehicles in 1970s television shows. Following the downsizing trend of GM and Ford during the second half of the 1970s — and spurred along by certain geopolitical events plus a “too big to fail” government bailout — Chrysler moved the Cordoba onto the much smaller platform used by the Dodge Aspen and Plymouth Volaré for the 1980 model year.

Production of the smaller Cordoba continued all the way through 1983; sales of these mini-Cordobas were dismal, but I managed to find this final-year survivor in a junkyard near Pikes Peak. 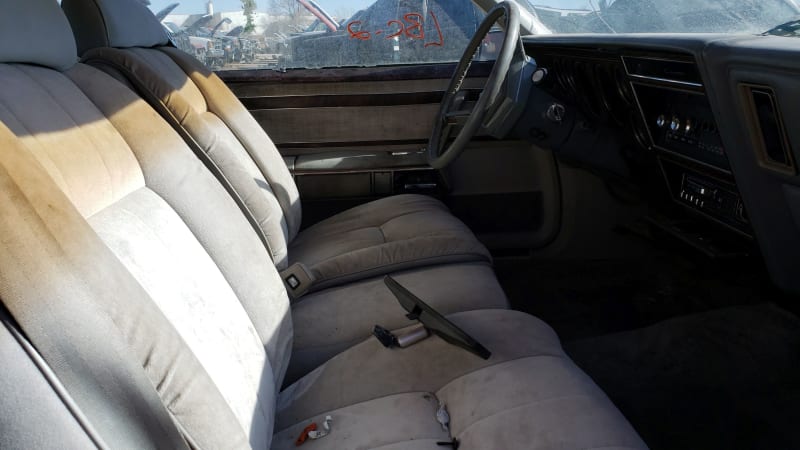 I’m pretty sure you could still get Corinthian Leather in the ’83 Cordoba, but this car has the base-grade “Monterey” cloth-and-vinyl interior. 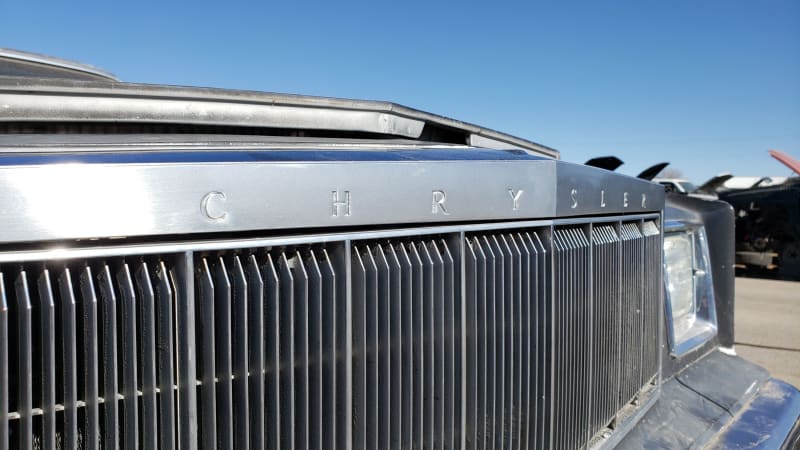 Production of more modern cars based on the brand-new, front-wheel-drive K platform was in full swing by 1983, so the rear-wheel-drive Cordoba and its siblings (the Imperial and Dodge Mirada) got the axe after that year. American car shoppers could get the closely-related Chrysler Fifth Avenue, Dodge Diplomat, and Plymouth Gran Fury all the way through 1989, though. 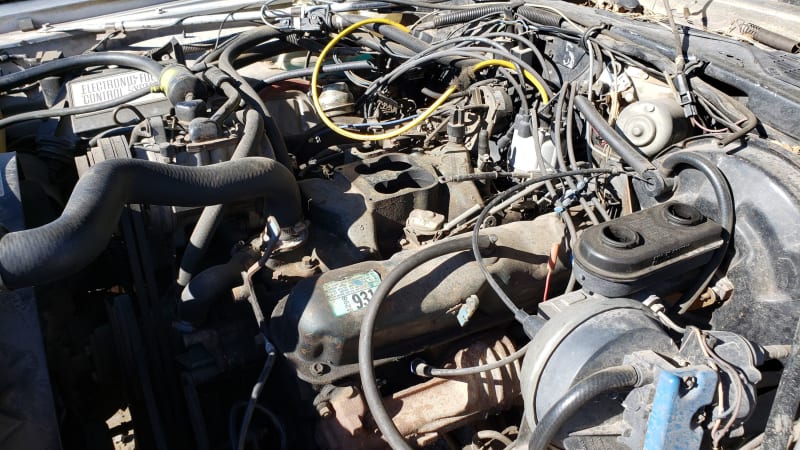 The sturdy-but-sluggish Slant-6 engine came as standard equipment in the 1983 Cordoba, but this car has the optional 318-cubic-inch (5.2-liter) V8, rated at 130 horsepower when new. Chrysler continued to put 318s (as the 5.2 Magnum) into new trucks all the way through 2003, and the Viper’s V10 was based on this engine’s architecture. 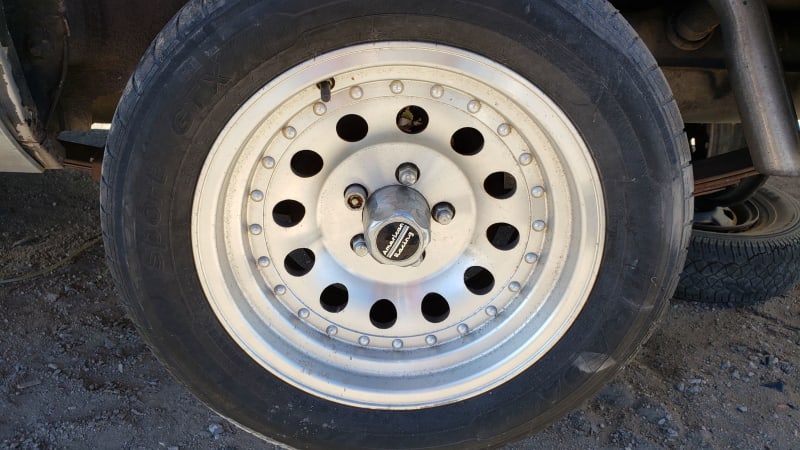 These American Racing aluminum wheels (and their more prestigious Centerline competitors) were serious stuff back in the 1980s. Nowadays, 15″ wheels are considered far too small to be worth grabbing at the junkyard, although I’m sure someone will grab these before the car gets eaten by The Crusher. 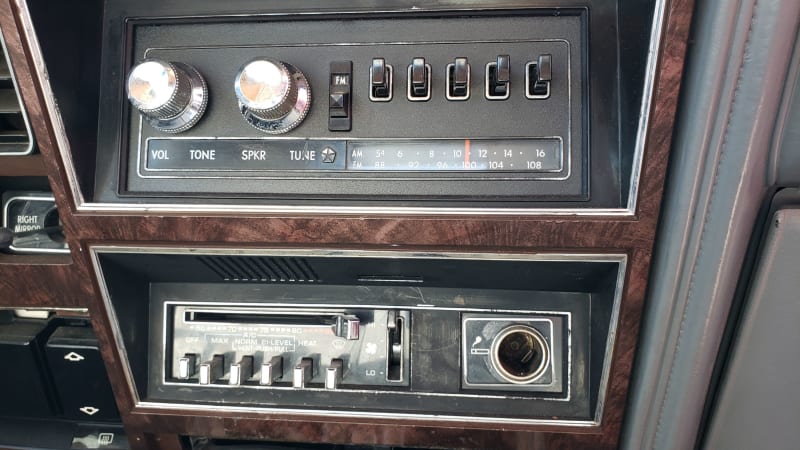 This factory AM/FM stereo radio cost $109 when the car was new (about $290 in 2020 dollars). If you wanted the radio with cassette deck and digital tuning, the cost rose to $402 ($1,070 today). These days, even the most penny-pinching subcompacts get very nice standard-equipment audio systems with Bluetooth or at least an AUX jack for your phone. 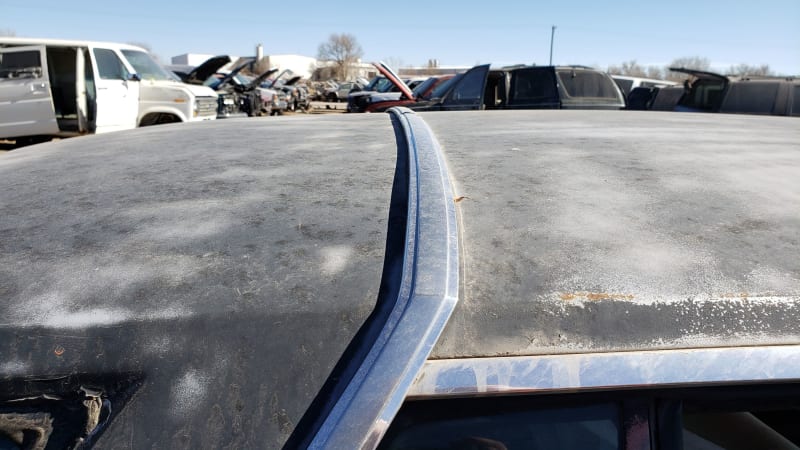 The padded landau roof succumbed to the elements years ago. 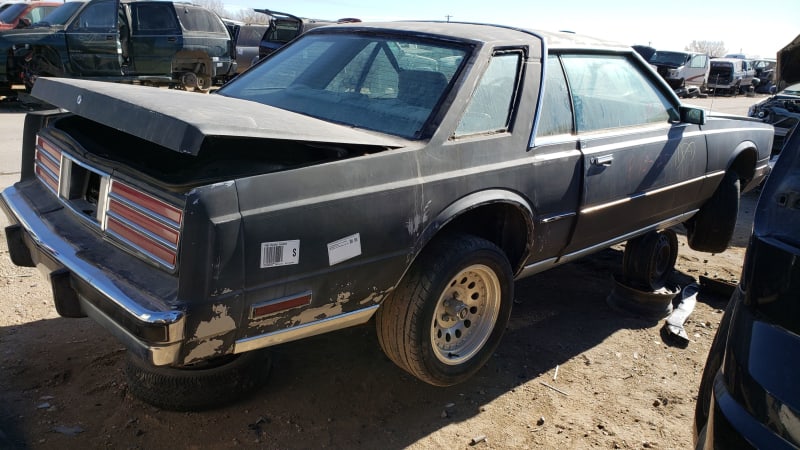 Base price on this car started at $9,805 with the V8, or about $26,100 today. Meanwhile, a brand-new 1983 LeBaron coupe with an $8,514 price tag sat beside this Cordoba in the Chrysler showroom; the V8 Cordoba had more power than any LeBaron that year, but the LeBaron had the roomier interior. Actually, the LeBaron with the the 2.2-liter Chrysler or 2.6-liter Mitsubishi four-cylinder engines had a better power-to-weight ratio than the 318-powered Cordoba that year, though the big torque from the V8 probably made the Cordoba quicker off the line. 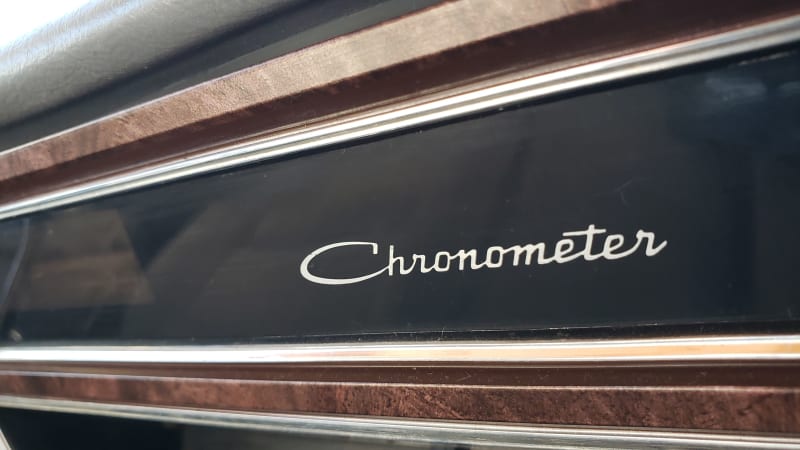 Chrysler started selling vacuum-fluorescent-display “Chronometer” clocks back in the late 1970s, and this car has one.

Ricardo liked what they’d done to his car.

This ad for the ’80 models reeks of desperation. Those K-Cars couldn’t arrive fast enough!

Corinthian Leather did go into this generation of Cordoba, at least with the 1980 models.

You’d think that Chrysler marketers would have gone with the correct pronunciation of Córdoba in a Spanish-speaking country, particularly one that has several towns named after the original in Spain, but Mexicans got this ad for the ’81 car-DOE-buh.